Introduce yourself
Hi there! I’m Keith, and this is my third year of being happily involved with the biggest best small festival in Ireland. My only regret is not being a part of it in the first couple of years! When I’m not on the Farm, I’m a self-employed music service provider running my own small but growing company, The Listening Post, based on the north-coast. At the Listening Post, I focus on working with original musicians drawn from Northern Ireland & beyond – arranging & promoting gigs & festivals, organising & managing tours, providing PA gear and more recently reaching into the field of artist management. I’m festival co-organiser at the annual Atlantic Sessions On The North Coast, taking place in November in Portstewart & Portrush, and also take part in a number of other music-based events. When I’m not beavering away in the creative sector, I try and stay fit & healthy by teaching & training in karate, which I’ve been involved for 14 years or so. 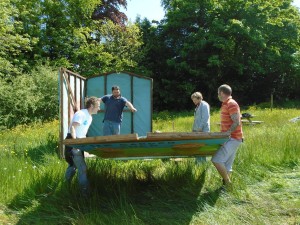 How did you get involved with Stendhal?
A chance meeting with two of the very handsome festival organisers – John Cartwright & Ross Parkhill! I’d been running gigs for a couple of years at Coleraine University’s late-lamented Senior Common Room, had heard of Stendhal and had been intending to get myself involved somehow. On this occasion I was at a volunteer fair, helping a friend recruit some volunteers for the charity she worked for. The Stendhal boys were set up opposite us, we got chatting, I was humbled to learn they’d heard of what I was doing with The Listening Post and – despite being there myself to recruit volunteers – I got well & truly recruited! John’s words will stay with me forever……’I’ve had a very special job in mind for you…!’
What did we make you do?!
The first couple of years I was involved in the festival as Artist Liaison – this was effectively acting as first point of contact with artists & band when they arrive on the festival site, making sure they’re welcomed and know that they’re valued; checking gear safely into secure storage; ensuring everyone knows where they need to be and when; and letting stage managers know that their acts have arrived on site. John had been exactly right about this ‘very special job’ – it worked great because I knew many of the artists and they knew me from my own work, and so it was friendly familiar face for them when they arrived. Later in the day, the role involved ensuring gear was taken to the correct stage and that acts, likewise, arrived at the correct stage at the right time. As with everything at Stendhal, however, the job goes well beyond the initial description and you find yourself doing all sorts of cool and unexpected things on the day!

How has volunteering changed for you over the years?
My role has changed, but I’ll tell you about that in a minute!
In addition to a change in role, each passing year has seen me get more involved in the build up to the festival. The first year I just came along on the day and did what I was asked. Since then I’ve become involved earlier and earlier, coming up to the Farm in the weeks and months before the festival to join the rest of the team in building the festival site. People really have no idea how much behind-the-scenes effort goes into making the festival happen – any time you drop in there’s something that needs doing and it’s a great feeling to be able to put a line through even one job on the list, you end up doing jobs you never imagined you would be when you arrived, but all of these things need done and sometimes the someone that ends up doing them is you! Everything from digging trenches and laying piping, building bridges & putting up massive stretch tents, to stocking the bar, postering & flyering, doing some gardening & helping Lance hide fairy doors! Stendhal Sundays are the best.
What will you be doing for this year’s Stendhal?
This year I’m being trusted to manage the Karma Valley Stage all by myself – I’m not quite sure why, being as how in the time I was left to look after it last year, a band member from rock legends Making Monsters managed to put their foot through stage – but I’m sure it’ll be fine! 🙂 I’ve done some stage managing at my own Listening Post gigs, and at the Atlantic Sessions, so I’m looking forward to it and I’ll get to see more of Stendhal’s fantastic line up this year, as a result!
What would you say to anyone thinking of volunteering at Stendhal?
Not to sound like Shia LaBeouf, but do it! Just, do it! If you’re thinking about it, then you have something to give and something that we can use, even if you don’t know what it is yet. In the lead up there are so many things to be done- whether on the artistic side or on the manual labour side. You’ll learn things you didn’t know, you’ll teach people things they didn’t know, and you’ll come away happily tired, in need of shower and feeling like you accomplished something really worthwhile. And you’ll make some new friends at the same time.
What is the best thing about volunteering at Stendhal?
For me, it’s the people. The music, obviously, but definitely the people. The Stendhal Crew are a community in the true sense of the word, wildly different personalities from very different walks of life all pulling together and working towards the same goal, primarily for the love of it. It creates a very positive environment at a time when there’s a lot of negativity coming at us from all over the place. The buzz I get from being a part of that community stays with me for months before and after the festival itself, and even being on site for a day with such awesome people can bring you up after a dodgy week, or set you up for a great coming week. Someone once said that the unit of currency between volunteers at Stendhal is a hug, there’s a lot of hugging that goes on at the farm, it’s not a rare thing to see two big hairy Limavady men locked in an embrace! And it’s not just the festival, we try to find excuses to get together throughout the year, usually based on music and having fun. And what goes around comes around, it’s always a great boost to have many of the Stendhal team coming up to the coast to help out at & support my festivals and gigs. In short, the best thing about volunteering at Stendhal? The great friends I’ve made there.
Have you volunteered at any other events because of Stendhal?
Most definitely. Working in the live music sector, Stendhal has been directly & indirectly responsible for a number of volunteering opportunities that have come my way. Last year I ended up volunteering at the awesome Culture Night Belfast as a result of Stendhal. This year, I’ll be doing the same as well as being involved in the Aperture Festival at Corrymeela, Ballycastle, again directly as a result of Stendhal.  Volunteering cultivates an attitude of positivity, a willingness to put yourself out there and maybe work a little bit outside your comfort zone and doing so broadens your horizons, presents opportunities that would never occur otherwise and allows you to grow & develop.
Anything else?
Our wee island punches way above it’s weight when it comes to original music, and festivals like Stendhal & the Atlantic Sessions and others are critical in getting real music out there, over and above the din of overpaid cover bands and soulless X-Factor music factory knock-offs. Get off your sofa and support original music, support your local festivals and support your local venues that work to keep the real music scene alive. If we don’t support them, they’ll be gone, and then we’ll be stuck listening to bad covers of good country songs by terrible artists forever!

Find The Listening Post, my-multi service music company at www.listeningpostni.com, drop us a line at listeningpostni@hotmail.co.uk and keep up to date with us on Facebook & Twitter at @listeningpostni. We are artist-focused; arranging & promoting gigs & festivals, organising & managing tours, and provide PA rental & artist management services. Check out Stendhal’s sister-festival, the Atlantic Sessions in November in Portstewart & Portrush.
Team Stendhal x